By Michael Baylor 0 Comments
When was the last time you walked into a data center and were stopped dead in your tracks by the beauty of a computer?  Right, probably never. That is why you will most likely never see a computer in any art history books...but there is one that may well change that. Even though there is amazing beauty in the intricate mesh of microelectronic circuits inside, most people never really get to see that. Instead, we have come to view a computer as nothing more than a box that we plug things into. That is most likely because there is more thought given to the exterior design of a toaster than most computers. As a result, computers have become so utilitarian that we do whatever we can to avoid looking at them. We hide them under desks, in computer rooms & data centers and now apparently, we are so disgusted by the sight of them that we hide them in the Clouds (pun intended). By the way, have you ever seen a containerized Cloud data center? Now that is an abomination of computer design if there ever was one. A Box is Just a Box The fact is, most computer enclosures are relatively utilitarian. It is just a box after all and what’s inside is all that is important, right? At least that’s the way most computer manufacturers view it. Packaging is normally the last consideration that goes into the design of a computer. It’s not really even “design” at least in the artistic sense, other than the consideration of where to slice some holes for cables and ventilation. But that’s not the way it was for Thinking Machines, the company that in the 1980’s was years ahead of its competition and without question, put the “sexy” into supercomputing. Most technology companies adhere to the age old design philosophy that “form follows function” where form is reduced to the utilitarian minimum necessary to fulfill structural and functional requirements. Thinking Machines however, recognized that few people would appreciate the extreme differences between the Connection Machine and any other computer in the world by simply looking at a boring beige enclosure. The Company wanted the outside to tell a story about the machine and convey the unique architecture that would be hidden from the human eye.
[caption id="attachment_2187" align="alignleft" width="250"] 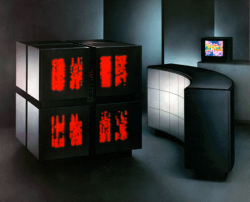 © Thinking Machines Corporation, 1987. Photo: Steve Grohe[/caption]
The design for the Connection Machine CM-1 and the subsequent enhanced version, the CM-2, was conceived by world renowned artist Tamiko Thiel. But just as the Connection Machine broke the mold on computer design, Ms. Thiel is not your average “artist”. Beyond the global accolades for her artistic work, she has a B.S. from Stanford in general engineering/product design and also an M.S. from MIT in mechanical engineering. She followed that with a stint at Akademie der Bildenden Kuenste (Academy of Fine Arts) in Munich and has broken new ground in the field of augmented reality with installations globally. Tamiko wrote a beautiful essay entitled “The Design of the Connection Machine” where she describes in eloquent detail, the process of designing the “wardrobe” for the most technologically advanced and revolutionary machine of its time. She begins with a concise problem statement that unless you continue reading, understates the complexity of the design challenge she faced. “Despite our ambitious goals for the appearance of the machine, Thinking Machines' concern was based on a pragmatic need: to communicate to people that this was the first of a new generation of computers, unlike any machine they had seen before.” Unlike Any Design They Had Seen Before Tamiko’s quest to find a form began with the design of the magnificent machine itself. One of computing’s great engineering accomplishments was the physical design of the Connection Machine. 65,536 processors grouped 16 to a chip for a total of 4,096 chips. She began the visioning process through a working session with none other than Nobel laureate Richard Feynman, who also worked at Thinking Machines during his time off from Cal Tech. Dr. Feynman helped her visualize the hypercube architecture so that she could begin the process of translating the internal design into an enclosure that would conjure up images of mad scientists working deep inside the Cheyenne mountain range. In her essay, Tamiko wrote “The search for a form had to start with bare practicalities: how do you physically organize a machine with 65,536 processors? Is it physically possible to build it like a ‘normal’ machine, or would we have to wallpaper a room with boards, and weave a rat's nest of cables between them? The processors were grouped 16 to a chip, making a total of 4,096 chips. These chips were to be wired together in a network having the shape of a 12-dimensional hypercube. The term ‘12-D,’ far from having to do with warp drives and extraterrestrials, had the practical but complicated meaning that each computer chip would be directly wired to 12 other chips in such a way that any two chips, and thereby the 16 processors contained in each chip,  could communicate with each other in 12 or less steps. This network would enable the rapid and flexible communication between processors that made the Connection Machine so effective.” Let the Drama Begin Tamiko’s design evoked emotion, something that is not normally associated with computers. The magnificent machine commanded attention and it was clear to anyone that saw it that this was no ordinary computer. It informed the viewer with authority; “I am new breed of supercomputer, a majestic machine that is capable of something very special.” The final design, used for both the CM-1 and its faster successor, the CM-2, was a massive, 5 feet tall cube formed in turn of smaller cubes, representing the 12-dimensional hypercube structure of the network that connected the processors together. “This hard geometric object, black, the non-color of sheer, static mass, was transparent, filled with a soft, constantly changing cloud of lights from the processor chips, red, the color of life and energy. It was the archetype of an electronic brain, a living, thinking machine.” In fact, Steve Jobs was so impressed with her design for the Connection Machine that he wanted her to design the NeXT computer. Private communication from Joanna Hoffman, who was working at NeXT at that time, told Tamiko years later. Unfortunately, Thiel had already moved to Europe to study fine art, and was not to be found.
[caption id="attachment_2186" align="alignleft" width="250"] 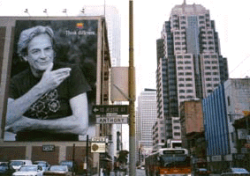 Richard Feynman in Apple's "Think Different" campaign[/caption]
Tamiko’s artistic prowess extended to the design of the last iteration of the Connection Machine, the CM-5. The CM-5 was designed by Maya Lin, the architect best known for the Vietnam Veterans Memorial in Washington DC. According to Thiel “I did play a small part in it: right at the end of the design I turned up in Boston, and Danny Hillis told me that the design, while beautiful, seemed to him to lack "life." I spent a day looking at the machine and talking to Maya and Danny about it. I realized that what was missing was the sense that the machine was alive, which I had accomplished by making the doors of the CM-1/CM-2 transparent, so that the status lights inside could be seen as they flashed on and off with the processor activity. In the CM-5 these lights were moved to a separate, additional panel on the edge of each machine segment. I suggested that the sides of the CM-5 be made transparent. The reply was that this had been thought of, but the machine needed to be in a Faraday cage. Yes, a cage, I replied - the sides didn't have to be solid, a mesh would suffice. And if the mesh occluded some lights some of the times, then when you walked around the machine the lights would appear and disappear, which would again give you the sense of a life inside of the machine. Danny loved the idea, but I never saw the CM-5 in person and don't know if this was implemented or not.” Lobbyists Outsmart the Thinking Machine In spite of building the most advanced computer of its time and hands down the most beautiful, Thinking Machines was ultimately out-lobbied by its competitors and closed its doors in 1994. There are still a few of these machines left, a CM-2 in the collection of the Smithsonian Institution National Museum of American History, and one in the Computer History Museum in Mountain View, Silicon Valley, California. The blood, sweat, intellect and artistry that went into the design of this magnificent machine created an archaeological artifact that will continue to astound future generations and the Tamiko Thiel design could stand side by side with any of the world’s great art treasures. Bloodless beige boxes? I think not! If you would like to know more about the artist, you can view samples of her work at http://www.tamikothiel.com/ where you can also order apparel with the original concept drawings that Tamiko created for her design of the Connection Machine like the one worn by Dr. Feynman in Apple’s “Think Different” campaign, shown above. I would like to thank Ms. Thiel for her generous giving of time, insights and guidance in researching and creating this story.