A couple of weeks ago, Evan Koblentz, president of MARCH, non-profit user group for vintage computer collectors, asked the SIGCIS members' opinion as regards to E.C. Berkeley's paternity of the expression 'Giant Brains'.

Given his famous eponymous 1949 Giant Brains or Machines that Think, of which typescripted draft was sold out for $ 16,000 at the 2005 Christie's auction of computing history items, was Berkeley, also the inventor of the Brainiac and of the GENIAC, the first one to come out with the expression? This question led to a quite full discussion on the origin of the term on SIGCIS mailing list. The discussion that ensued expanded on how the brain metaphor as used to refer and comment on computing technologies dated back to the 1930s at the least, to times when computing devices were mechanical. Konrad Zuse, among others, would have come out with the 'mechanical brain' analogy as early as 1937 [1].

The discussion reminded me on the pervasiveness of the human dream of, one day, managing to artificially reproduce life itself. This is now the realm and domain of expertise of cyberneticians but was also that of much more ancient engineers, such as Jacques de Vaucanson (1709-1782) well-known for his mechanical digesting duck.

The technologies embodying this dream of mechanising life have evolved over the centuries. Yet, the dream itself has changed remarkably little.  Alike Vaucanson when he was making musicians-automata,  we are  fascinated with all the devices mimicking life processes. Nothing cuter or less attractive than a 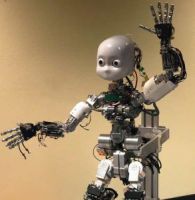 kid-looking crawling robot.  Nothing scarier than Deep Blue and Deep Fritz (high street price: 55€) computer programmes playing chess better than mathematical geniuses and portent, as in the Matrix, or in the Sarah Connor Chronicles, of the end of unmechanised  life on Earth.

Strangely enough I cannot help but think that this plays a big part in our lives... and - at least -  might somehow relate to Wall-E being celebrated as Best Animated Feature at last night's Oscars' ceremony...