The IBM Selective Sequence Electronic Calculator (in use from 1948-1952) pioneered some features of the modern computer such as self-modifying instructions and stood on the indistinct dividing line between the modern computer and the calculating machines that came before. It was also a pioneer in another sphere, the movie business. In the 1952 spy thriller Walk East on Beacon the SSEC plays a role as the new electronic calculator of Professor Albert Kafer. Kafer is working on a top secret project that has caught the attention of Soviet spies who seek to extort classified information out of the professor. 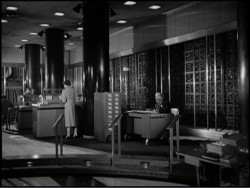 The SSEC was not the first complex calculating machine to play a prominent role on the big screen, for example the GE differential analyzer showed up in the 1950 movie Destination Moon and the 1951 movie When Worlds Collide. For me however Walk East is of greater interest because of my study of the SSEC and its designers at IBM, especially astronomer Wallace J. Eckert. The SSEC holds a special place in their history. Also, there is little footage of the SSEC in action. I learned about the appearance of the SSEC in this movie many years ago (probably from the Brooke papers at North Carolina state university in Raleigh), but could not obtain a copy until a year and a half ago when the Turner Classic Movie channel released it on DVD and broadcast it on cable. 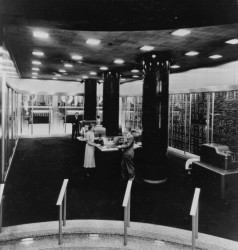 The SSEC appears once in a 60 second scene in the middle third of the movie. It is referred to in one earlier scene, but no name is given for the machine, it is called a "new electronic calculator" and "my electronic princess". The movie's calculator is supposed to be located the fictitious Montrose laboratories in Boston. Comparison of the film with some photos of the SSEC show that they added Dr. Kafer's desk and an associated filing cabinet. Although no one ever speaks the words IBM, the IBM logo on one of the parts does show up for a few seconds (see picture). 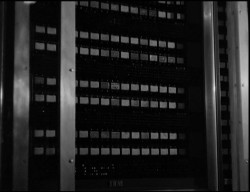 The portrayal of computers in movies has been grist for the mill of some historians, such as Cheryl Knott Malone's discussion of the movie Desk Set where the computerization of a library is the setting for a romantic comedy. Malone sees in the movie a reflection of the popular anxieties about the computer and automation along with a reflection of the view of the computer establishment about the limitations and opportunities of the new machines. Nathan Ensmengler picks up Malone's analysis and uses Desk Set as a way to discuss the image and anxities of computerization in his book The Computer Boys Take Over and elsewhere.

Walk East on Beacon declares itself a drama of real life and is often remembered for its use of location shooting, filming in Boston and other locations rather than on a Hollywood set when possible. The film also touts its realism by noting the participation of the FBI in the production. I can make no judgement on to the accuracy of the film's portrayal of couner-intellegence efforts. However there is no doubt this goal of authenticity is why the sought out the SSEC as a backdrop for filming. It also suggests how computing machines had become symbolic of latest and most important technological and scientific elements. Walk East on Beacon the portrayal of the calculator has verisimilitude. One character describes how thanks to the new calculator the professor will soon be in his second century of calculations meaning that the machine had done calculations that it would take a single individual working by hand that long to do. This is an idiom for illustrating the power of computing machines that was often adopted in those early days of computing for example Howard Aiken claimed the Harvard Mark I could perform calculations that would take a human six months of work in a day (in the published Manual for the machine, page 51).

When the machine provides the crucial confirmation of Kafer's theorem he is ecstatic and says "My electronic princess has done it." This sentimentality directed at a machine is something present from the earliest days of computing and persists to the current era where many people remember with fondness a computer system they found particularly enjoyable to use and speaking of the machine in human terms. The science of film is kept obscure, although supposedly inspired by a Reader's Digest article by J. Edgar Hoover that described the efforts to catch the spies who stole America's atomic bomb secrets. The secret at stake in the movie is some work of Professor Keifer proven with the help of the calculator that are key to Project Falcon a program to put satellite's in orbit and related space travel. All details are kept deliberately vague so that the Professor's work is a McGuffin in sense of the thing which everyone pursues, but which otherwise has no relevance to the plot.

The few hints dropped suggest Keiffer has proven some theorem in orbital mechanics and this would be appropriate given the SSEC's role in various innovations in celestial mechanics such as the numerical integration of the outer planets' motions over a 400 year period. The fact that the machine did classified work also harmonizes with the fact that the SSEC did classified work such as the massive hydro-dynamics problem Project Hippo for the Los Alamos Laboratory of the Atomic Energy Commission. The place of a singular machine such as the SSEC in a film along with its role in mathematical and scientific work suggests having a bit of fun by adding a new twist to two old games.

These pursuits are the assignation of Erdös numbers to mathematicians based on the number of co-authorships required to connect the mathematician to famed mathematician Paul Erdös. For example John von Neumann co-wrote a paper entitled "Statistical treatment of values of first 2,000 decimal digits of e and of π" calculated on the ENIAC with George W. Reitwiesner (and Nicholas Metropolis) and Reitwiesner wrote "Remark on determination of characteristic roots by iteration" with Joel Lee Brenner and Brenner cowrote the paper "Generation of alternating groups by pairs of conjugates" with Paul Erdös and others. This gives von Neumann a Erdös number of 3.

The other game assigns a Bacon number to an actor based on the number of films required to connect the actor to Kevin Bacon by way of the appearances in movies. So Finlay Currie appeared in Stars and Stripes Forever with Rober Wagner, Wagner appeared in Wild Things with Kevin Bacon, giving Currie a Bacon number of 2. This suggests we might assign a Kevin Bacon number of 3 to the SSEC, since it appeared in Walk East on Beacon with Finlay Currie. Also, by stretching the definition of coauthor we might consider the SSEC a co-author of von Neumann on a paper such as "A Method for the Numerical Calculation of Hydrodynamic Shocks" which published non-classified elements of project Hippo, this would give it a Erdös number of 4. The popularity of these two games have led to the idea of a Erdös-Bacon number for those who have both contributed to film and mathematics and which is found by simple addition of the two individual numbers. The SSEC would thus have a Erdös-Bacon number of 7.

While calculating Bacon numbers can be an experssion of mastery of film trivia, a simpler method (which I availed myself of) is provided by the Oracle of Bacon, likewise automation of Erdös number calculation also exists for example here here. On the web a good place to look for examples of real computers playing a role on the big screen can be found at Starring the Computer, which catalogues examples of computing machines. It is from this site that I got the information about the appearances of the GE differential analyzer in various movies and it covers other machines from 1950 to the end of the 20th century. I learned two years ago the SSEC was featured in a newsreel story in 1948 that included footage of it in operation, part of that newsreel can be viewed at as part of a longer program Pioneer Computers Part 1 (the section on the SSEC starts at about 49:15 on the video) at the Computer History Museum's YouTube channel.

An independent scholar, research on the use of computers in science especially mid-twentieth century celestial mechanics, taught the history of engineering